I’ve always wondered a bit (and I’m not alone) at the facial expression of the Tyger in Blake’s “The Tyger” — it tends to look a bit silly and sheepish when compared to the destructive and dangerous animal described in the poem. The link below to a series of images of bad taxidermy on io9, however, makes me wonder if Blake was just following a bad model. The very first image is of a 1731 lion reconstructed from a pelt and bones by a taxidermist who had never seen a lion. The cougar about halfway down (copied below) almost looks like it could have been Blake’s model.

Warning: you will either laugh out loud or be disgusted. I’m guessing both, maybe at the same time —

One addenda, though: Sandy Gourlay of Rhode Island School of Design reminded me on NASSR-L that “there were living tigers in the Tower and other menageries during much of Blake’s lifetime, and there’s a moderately scary tiger in his notebook. Check out Tippoo’s tiger too (too late to be relevant), and the big cats in the 18thc editions of the Encyclopedia Britannica.” He’s recalling previous scholarship by Richard Altick, Robert Essick, Jack Grant, and Michael Phillips. Doesn’t eliminate the possibility that Blake could have chosen to follow bad taxidermic models for some reason, but we don’t want to think he had no other choice.

You might want to check out my comparison chart of Blake’s tyger heads. 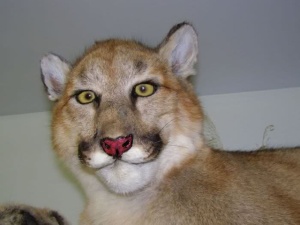