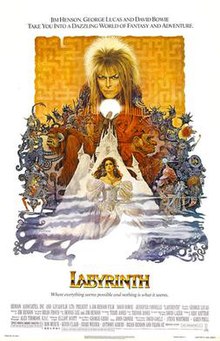 In many ways, Bowie defied categorization by transcending binary identities like male and female or heterosexual and homosexual. Bowie even escaped fixed labeling as a musician, artist, actor, or performer, thereby asserting that rational order’s authority over individuals is illusory. His embrace of opposing images (male vs. female, public vs. private) was the linchpin of his commitment to his own genuine selfhood.

I’d never thought of Bowie’s performance in the 1986 film Labyrinth as reducing him to one of Jim Henson’s muppets until now. Perhaps I still don’t. I think that performance elevated him to the status of one of Jim Henson’s muppets, perhaps the best muppet of them all. Bowie certainly had fun with the role; while the film performed poorly at the box office, grossing only about half of its production costs in the US, it’s never been seen as one of Bowie’s embarrassments, and it’s developed a cult following since then. An entire generation became Bowie fans because of this film, and Toija Cinque and Sean Redmond in The Fandom of David Bowie (2019) reports that a number of young female fans experienced a kind of sexual awakening after watching this film — the codpiece! (pp. 32, 45).

Aglaia Venters provocatively argues in “The Goblin King, Absurdity, and Nonbinary Thinking,” chapter 9 of David Bowie and Romanticism, that Bowie’s character Jareth was not a villain at all, but seemed to act more consistently in the interests of the young heroine’s (perf. Jennifer Connelly) growth and development. Through an extended close reading of the film, she characterizes Bowie’s Romanticism through its destabilization of normally stable binary opposites: hero/villain, actor/character, masculine/feminine, etc.

Check out the iTunes playlist for David Bowie and Romanticism.

You can read more in David Bowie and Romanticism. Order it from the Bookstore or have your local, college, or university library order it.

Aglaia Maretta Venters teaches in the History Department at South Louisiana Community College. She has recently published a chapter on Hegel in Reading as Democracy in Crisis: Interpretation, Theory, History (Lexington, 2019) and has forthcoming publications on French Renaissance political theory and Jesuit paradigms for understanding the tensions between reason and faith.