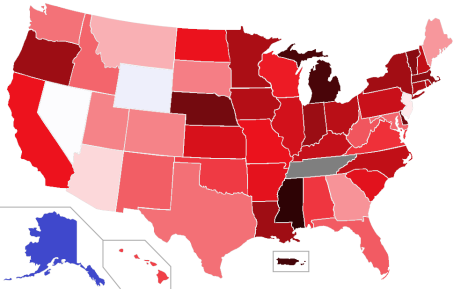 I first learned of the blog The Law School Tuition Bubble via George Cornelius, who recently reblogged this latest analysis of law school graduate overproduction by region following statistics provided by the American Bar Association. The two worst states are Mississippi and Michigan, which produce about ten and about six and a half graduates per job opening respectively. My own state, Ohio, produces a bit less than three graduates per job opening, which is bad enough, but since we’re in the same BEA region with Michigan, Michigan’s numbers may influence Ohio’s job prospects for new law school graduates. Only Wyoming, Nevada, and Alaska have more jobs than law school graduates.

Schools will always accept students regardless of their job prospects. If you’re considering law school, you may want to consider the schools with the highest job placement rates for grads. If you can’t get into one of those, you probably want to consider other career options.