Here’s how fake news — the real fake news, right wing fake news — disseminates itself, and it depends on the fact that six in ten Americans only read headlines according to a recent study.

I receive daily news alerts from a number of sources from the far right to the far left. This morning, a far right outlet, Godfather Politics (just the latest iteration of a continually renamed site) sent out an email with a list of headlines, almost all of them alarmist in different ways. One of them included a disturbing headline: almost 8 million illegal immigrants tried to buy guns recently according to FBI stats. 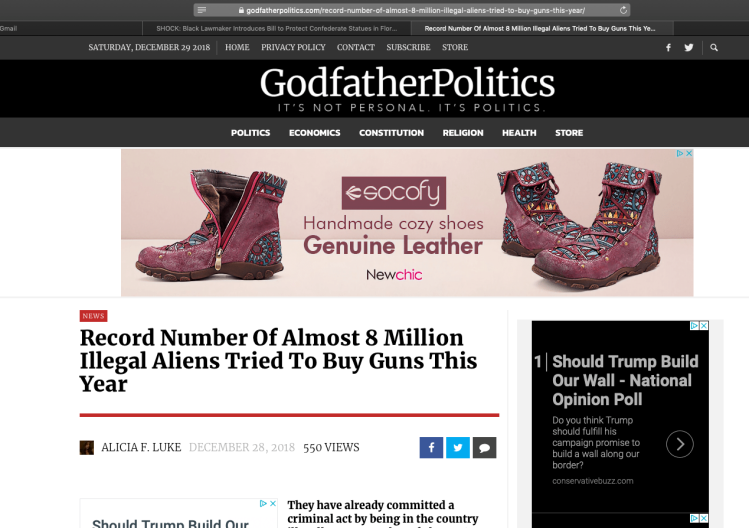 You can read it yourself here: godfatherpolitics.com/record-number-of-almost-8-million-illegal-aliens-tried-to-buy-guns-this-year

They got their information on December 27th from the Washington Examiner‘s Twitter feed, @dcexaminer 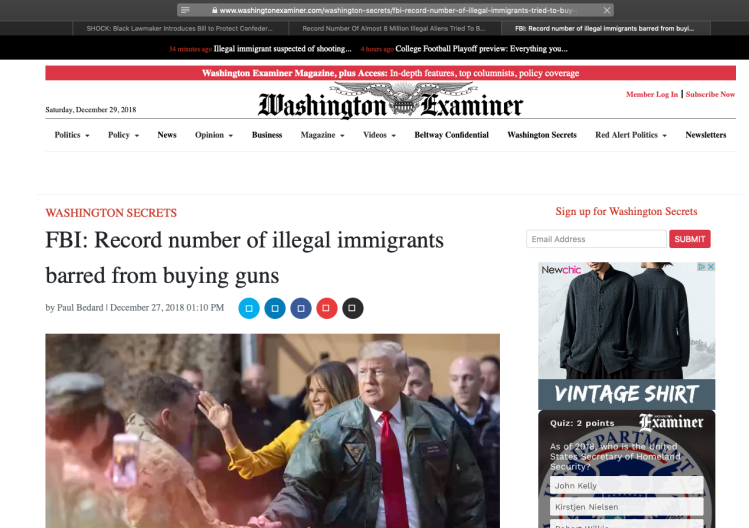 Which you can read for yourself here: washingtonexaminer.com/…/fbi-record-number-of-illegal-immigrants-tried-to-buy-guns

Now the Washington Examiner did post a correction on the news article:

You’ll notice that the venue incorrectly named itself Washington Secrets in the retraction, which was no doubt an earlier iteration of the Washington Examiner, but they’re so sloppy they didn’t even catch that.

What is the real number? The Washington Examiner did in fact report the real number. Of the 8 million illegal immigrants barred from buying guns, 3,300 attempted to buy guns in 2017 and were denied:

So what has happened?

I know my right wing friends. They’re going to say “everyone makes mistakes. Mainstream media does the same thing.” No, this is the deliberate spread of misinformation that leverages the fact that most readers don’t read more than headlines. I know that because they didn’t remove the tweet. I also know it because every time I follow up on right wing media headlines I get the same results. I don’t get these kinds of results from my follow-ups on the Washington Post or the New York Times, however.

What do we really learn from this fiasco?

First, that consumers of right wing media are regularly being fed massive lies and they believe them. My right wing friends won’t bother reading this, and if they do, they might believe it in this one instance but never learn to distrust their sources.

Next, that right wing media is complicit with the Trump administration in manufacturing an immigration crisis that doesn’t exist. The Trump administration, with the help and support of right wing news outlets, is lying about the nature and extent of our immigration problem. The fact is, most illegal immigrants are here to work and to support their families, so they are overwhelmingly law abiding once they get here. And, for the record, they keep coming because American employers keep hiring them — but the Trump administration is not targeting American employers even though they are just as guilty of breaking the law as the illegal immigrants that they hire.

Finally, we learn that the immigration crisis is in fact a manufactured, fictional crisis. The numbers prove it. 3,300 illegal immigrants out of about 8,000,000 on the list is .04% — only .04% of illegal immigrants who enter the country attempt to purchase guns. That’s in contrast with 30-40% of American households with guns as of 2017. In contrast, as of 2011, “data collected by the FBI show that firearms were used in 68 percent of murders, 41 percent of robbery offenses and 21 percent of aggravated assaults nationwide.” So the overwhelming majority of gun offenses are committed by Americans who own guns, not illegal immigrants. If we want to curb gun violence here in the US, we need to do it with extensive, national revision of our gun control laws. No wall is going to change that, and we need to quit blaming illegal immigrants for our own problems.

And yes, in case you weren’t sure before, this all adds up to the fact that the Trump administration forced a government shutdown for no good reason at all, and he did it while his own party controlled both houses of Congress.

Dr. James Rovira is higher education professional with twenty years experience in the field in teaching, administration, and advising roles. He is also an interdisciplinary scholar and writer whose works include fiction, poetry, and scholarship exploring the intersections of literature and philosophy, literature and psychology, literary theory, and music and literature.. His books include Women in Rock/Women in Romanticism (in development), David Bowie and Romanticism (forthcoming 2022), Writing for College and Beyond (a first-year composition textbook (Lulu 2019)), Reading as Democracy in Crisis: Interpretation, Theory, History (Lexington Books 2019), Rock and Romanticism: Blake, Wordsworth, and Rock from Dylan to U2 (Lexington Books, 2018); Rock and Romanticism: Post-Punk, Goth, and Metal as Dark Romanticisms (Palgrave Macmillan, 2018); and Blake and Kierkegaard: Creation and Anxiety (Continuum/Bloomsbury, 2010). See his website at jamesrovira.com for details. View more posts