The two things wrecking higher ed are state disinvestment in higher ed (massive budget cuts) and increased spending on administrators and administration, who everywhere but community colleges are on about a two to one ratio with faculty and staff.

Big picture: education budgets no longer exist to educate students, but to increase profits for a limited sector of Americans.

This is your tax money. You can do something about this. The only solutions at this point are political. 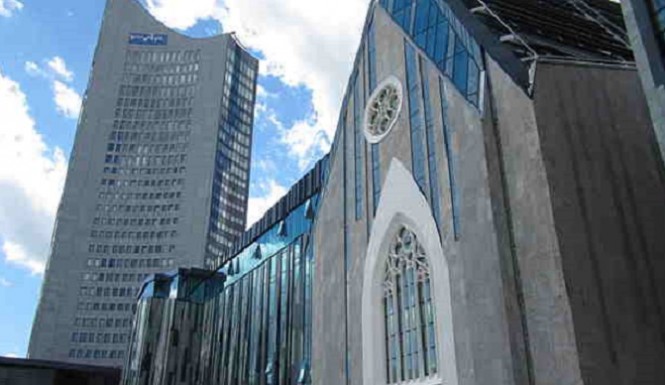 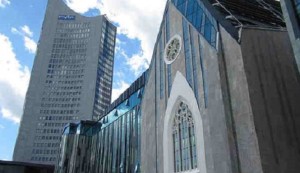 Yes, it’s true: US students who have a conversational knowledge of German have been invited to attend German universities for free. I would like to encourage all US students to take them up on this offer. Germany has some of the best universities in the world, and being centrally located in Europe, any student attending universities in Germany will have relatively easy access to Europe’s most significant cities. What an adventure.

Germany is able to make this offer because German universities are made up of, for the most part, libraries and classrooms, and because Germany doesn’t use federal tax money in the form of financial aid to support farm teams for professional sports that already generate billions of dollars a year in revenue (as if they couldn’t fund their own farm teams), and because Germany isn’t embroiled in massively unnecessary overseas wars, and because the German government isn’t spending more on their military than the next eight nations combined.

But none of that is the real issue. The real issue with higher education in the United States is that it’s being turned more and more into a profit center and less and less into an educational center. The ultimate goal for higher ed. is to spend as little as possible on it while charging the same tuition and fees. Yes, that’s it. That is why there’s a lot of nonsense rhetoric about a higher ed “crisis” (the only crisis is that it’s being defunded), and why there’s a big push for computers to educate our students rather than teachers, and why over 70% of our college classes are being taught by adjuncts, and why non-profit educational institutions with occasionally bad spending habits are being demonized while for-profit educational institutions engaged in massively fraudulent practices are being defended, and on and on.

That is what the “higher ed crisis” is all about. That and nothing else. The “crisis” in US higher ed. is only about the full transformation of US higher ed. into a profit center rather than an educational center. It starts with tuition being turned into a profit center in the form of student loans, and it continues into daily operations being turned into profit centers in the form of contractors, testing centers, educational technology, and the elimination of full time instructional staff.

Are you? I hope not. Vote Republican in the next election, though, and you’ll be saying nothing else.

Let me put it another way: you’re already paying more than enough in taxes for you and your children to have free quality 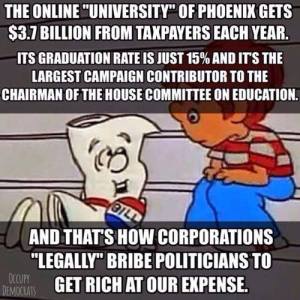 education through four years of college. But the part of your tax money that should be earmarked for education is being spent instead on bank profits, college sports, massively inflated administration, massive profits for for-profit educational institutions that don’t really educate their students, and — get this — on industry lobbyists who use the profits made from your tax money to keep you from receiving any benefit from it.

So when a politician says there isn’t money in the budget for education, ask them what they’re spending these billions of dollars of revenue on instead. A $1 trillion plane that doesn’t work (i.e., defense contractor profits)? Another unnecessary foreign war (i.e., defense contractor profits)? A ten year road project (i.e., payback for graft)? Ask where the money is going, and ask in detail. You’re a voter. You’re a US citizen. It’s your money. You have the right.

Defund for-profit colleges. Defund unnecessary wars. Spend American tax dollars on American citizens or, in other words, spend your money on you and your children. Tax money is your money. Don’t forget that. It is yours. Invest in America’s future by investing in education, our only source of intellectual capital, and invest in education by investing in teachers. Machines don’t educate people. Only people do.

Anyone who tells you anything else is, literally, selling something.

If you’re serious about pursuing this option, you may want to check out Rebecca Schuman’s blog on Slate to learn a little bit about how German universities are run.

The Chronicle of Higher Education is running a series of articles in this issue about the state of higher education and the history that led us to its current state.

The short version is that economic downturns and private sector commitments to paying as little taxes as possible has led to cuts in state budgets. Rises in tuition costs are exactly proportional in many cases to cuts in state budgets for education, and in order to drive up admissions, colleges are increasingly investing in sports and amenities rather than in qualified educators.

The result is that the business sector is getting what they’re paying for in the form of low-skilled college grads, the costs of college are being increasingly pushed onto the public in the form of debt, and a new debt crisis is looming as college graduates are increasingly unemployable or underemployed, making it difficult to repay these student loans.

Colleges and universities can be more responsible in their spending patterns too, but that by itself isn’t enough to reverse this situation.

You might think it’s smart to just pass by college altogether, but with a few exceptions, bad prospects for college grads mean worse ones for those without a college education.

The only winners will be the financial sector — at your expense.

Keep in mind that you’re already paying taxes for public education, and you’re not receiving the benefits of those taxes.

Take your time and read through these reports. They’re important.

An Era of Neglect – Special Reports – The Chronicle of Higher Education.