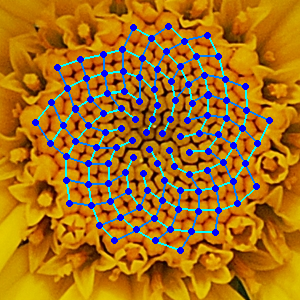 I read a few pages of Mary Oliver’s Blue Horses (2014) this morning — which is very enjoyable, by the way, pick it up if you can — and while reading recalled an experience I had publishing one of my own poems in a small journal. The poem was a little gimmicky. Titled “Liber Abaci,” it was based on the Fibonacci sequence, a series of numbers in which each number is based on the sum of the two preceding ones: 0+1=1; 1+2=3; 2+3=5; 3+5=8; 5+8=13; 13+8=21, etc. The sequence was discovered by Leonard de Pisa in 1202, later known as Fibonacci, and is historically and mathematically significant because it’s so often found in nature: tree branches, leaves on a stem, bracts on a pine cone, fern leaves, and on and on.

I wrote my poem so that each line had a number of syllables corresponding to each sum in the sequence. 1, 3, 5, 8, 13, and then 21. The poem was six lines long ending with a twenty-one syllable line almost too long for the page, and it compared objects in nature to a woman waking up in the morning and not wanting to get out of bed. I used words like “stone” and “mountainous.”

In my case, the published product was eleven lines instead of six, none of the line breaks were followed, and of course that ridiculously long twenty-one syllable line was broken up into at least three lines. The editor of the collection didn’t understand the main conceit of the poem, didn’t understand the placement of the line breaks, and was only reading the poem for imagery and nothing else. In all fairness, it’s a weird and unexpected conceit, but the poem looked weird enough that s/he might have thought to ask first. I would bet, though, counting syllables doesn’t land on the editor’s radar, but even if it did in this case, the pattern may not have been identifiable.

Either way, I initially wanted to title this post “The Unbearable Stupidity of Poetry Publishers,” but somehow (and in the end only partially) restrained myself. To be honest, I’ve collected a number chapbooks and poetry collections over the past couple of years, and aside from the big publishing houses, what I find is very inconsistent. Some of it is very good, but quite often poetry publishers and editors seem to care only about what is being said with no attention to how, or how well, and the results are often juvenile and embarrassing. Poetry publishing follows the basic US business model: selling a lot of stuff cheap will make you rich, so don’t sweat the details or worry about quality. Save time and money and just get it out there, especially if you can get a bunch of people to pay you to publish their work. The product itself doesn’t matter.

So I’d like to start on the ground floor about what a poem is. A poem is a written creative work characterized by attention to…

Rhythm and sound don’t necessarily mean fixed rhyme and meter, as in a sonnet. Free verse pays attention to rhythm and sound too, and employs it deftly to create emotional and other effects. It’s not that free verse doesn’t follow any patterns of sound and rhythm, just not fixed patterns of sound and rhythm. Free verse creates its own patterns and its own effects. But I think this brings us to a fundamental truth about poetry: what makes a poem a poem is its attention to line.

How poems divide up their lines controls their rhythm, sound (whether or not they’re using rhyme), metaphor and metonymy (as words at the ends of lines will be implicitly linked), and the poem’s arrangement of white space, which can also convey meaning. In other words, the poem’s use of line, more than anything else, is what makes a poem a poem. There is one exception: prose poetry, which runs its lines from one margin to the other just like prose, but that’s a lone exception. Otherwise, you know that a poem is a poem just by looking at it because it is broken up into lines, even if you don’t know anything else about poetry, or in other words, if you’re like most poetry publishers.

So, if you like reading poetry, and want to try writing poetry, and especially if you’re publishing poetry: pay attention to line. Start there. Write the whole thing out as one sentence and then break it up into lines again and ask yourself: what changed? If you noticed a difference, that’s a poem.