Please excuse Epstein from class for the rest of his life because he has died.

So long, Robert Hegyes, and thanks for all the laughs.  You made me and my friends laugh at ourselves when we were in the seventh grade and we still haven’t forgotten…

My wife left very early this morning to take the Praxis test in English at a college about forty miles away from where we live.  That means I was left in charge of breakfast.  But it gets worse.

When my children awoke, they all knew I was left in charge of breakfast.

“Do you want eggs and toast?” (which I had already made).

“No, we want cereal with milk” (Grace and Penn almost simultaneously).

Zoe got up about fifteen minutes earlier than everyone else, went straight to the refrigerator, and showed me what she wanted for breakfast: leftovers from last night’s white bean and sweet potato soup.

Who was I to argue?

“Can I have bananas with it?”

“I think we’re out of bananas.”

“Can I have blueberries?”

“I think we’re out of blueberries.”

“Can I have chocolate chips”

Quite uncontrollably, deep in the recesses of my mind, an ancient song started playing: “Dad is great! He gave us the chocolate cake!”

“No, Grace, you can’t have chocolate chips.”  Although I sincerely felt her suggestion was a good one and actually wanted some myself, I still fear the conniption fit.

Now you need to understand that my daughter is not just a five year old.  She is five going on thirty.  That means she does not trust any man’s account of what is in the refrigerator without checking first herself.  After we both rummaged through the refrigerator, I said, “I think the only fruit that we have is apples.”

Then Zoe, of course, wanted an apple too.

My youngest daughter, Zoe (23 months old) is an iPad freak. She’s not an iPad lover. She’s not an iPad fan.  She is an iPad freak. She’s always the first one to get up in the morning. She runs into my room almost every morning, maybe or maybe not saying hello, but always… always… runs straight for my iPhone. She likes my xylophone and piano apps. And to make calls. Earlier today she was napping in her bed next to my wife, woke up, and immediately grabbed my wife’s phone. My wife 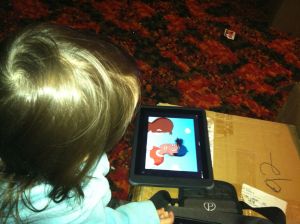 took it away from her and told her to go back to sleep. She cried but laid back down. FIve minutes later she sat up again, grabbed my wife’s netbook, and said “iPad!” My wife said, “No, your Daddy has the iPad.” So she ran out of her bedroom into the living room looking for me. On the couch. Says a lot about me, I think. She didn’t find me there, so went back to ask my wife again where I was. This time, she wasn’t so verbal. She just held up her hands, palms up, and looked incredulously at my wife, who said to her, “Your daddy is in his room.” So she ran into the other bedroom, didn’t find me, and ran straight back to her mother, who told her that I was in the Big Room where my office is.

But, I have to go now, because, thank God, she now wants me to read a book to her…

From the Oxford English Dictionary:

Your word for today is: nyctograph, n.

A device invented by Charles Dodgson (‘Lewis Carroll’) with which a person can record ideas (esp. those remaining after sleep) at night in bed without fully waking up.

The rather general description of Lewis Carroll’s nyctograph provided by the OED cannot, of course, even begin to do it justice. Here’s a reconstruction of the device itself: 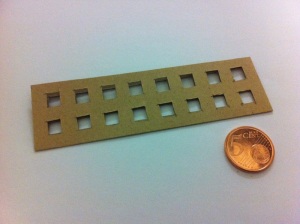 The device itself is not the real magic here, of course. Carroll invented a new alphabet consisting of lines and dots placed within the boxes. The device above would be placed on a sheet of paper, and Carroll would draw his letters along the inside edges of each box. When two lines of text were completed, he’d move the device down the paper and start over again.

Carroll was concerned about being able to record easily his memories of his dreams, or any other ideas that happened to pop into his head at night. Living in the nineteenth century before the widespread use of electricity, wanting to write at night meant having to get out of bed, light a candle, and then sit down to write. He invented the nyctograph and its alphabet to save himself the trouble of doing so. The text itself looks like this:

Now I’d like you to wrap your head around what’s going on here. Fully. Carroll invented a new alphabet and a device to write it with so that he didn’t need to get out of bed to write something down. Okay, I understand that. But… why not just write freehand on a sheet of paper lying next to the bed?

He needed this device to write neatly in the dark.

He cared about writing neatly in the dark.

He prefers complex solutions to simple problems. It’s like the (very likely) urban legend about the Space Pen. The story goes that Nasa wanted a pen that could write reliably in zero-gravity environments, underwater, and in any position — upside-down, sideways, etc. — so spent $1,000,000 on research to produce this pen. I own one. Works pretty well. Bought them for my kids for Christmas one year (gratuitous fatherhood reference).

The Russians had the same problem so decided to use pencils.

Lewis Carroll was a space-pen kind of guy. I also think he was too often bored, so invented problems to amuse himself.

Keep in mind: Three children, 9, 5, and not quite 2.  My elder daughter posts a knock-knock joke to Facebook:

Knock knock
Who’s there?
Owl.
Owl who?
Yep, that’s what they say…

Yes, it is terrible.  She is passing on her own suffering, as her manager said it to her.  I, in turn, passed it along to my younger children.  What I received was three knock-knock jokes in return.  My 5 year old’s:

I think she is drawing her inspiration from Dali.

Now there’s a certain continuity to this one.  It has context.  It still makes no sense.

And then my almost two year old:

I’ve been sick the last few days so have some updates:

The backyard neighbor has given his tree a Jedi funeral atop a pyre made of old carpet.

Our tree has found a temporary home.  Do you think it blends?